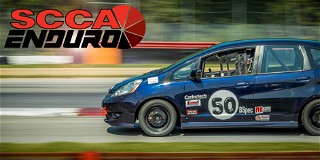 It’s nearly here! Following quite a bit of anticipation, the green flag for the historic launch of the SCCA Enduro National Tour is about a week away, with the event taking place at Nelson Ledges Road Course in Garrettsville, OH, during the May 20-22, 2022, weekend. There, a 16-hour race will be broken into a pair of eight-hour stints taking place over the course of two days at a track that is no stranger to SCCA endurance races.

SCCA’s Enduro National Tour is built on a team concept where the more, the merrier philosophy applies to both “bang for your buck” and having fun with other members (and cars).

The standard entry fee is a flat $1,475 for each single-car team, and each team must have a minimum of three drivers – but there’s no cap. That means you can bring as many teammates as you want, share the 16 hours of racing time as you wish, and split that flat-fee cost to make things easier on everybody’s bank account. If you want extra track time, optional test sessions on Friday are just an additional $285.

But even better, the next seven teams to register will get $725 off the entry fee. Why? Being an early adopter to anything requires a bold move, and the SCCA Enduro team wants to encourage even more racers to take that leap into history. To further help you on your way, we’ve also assembled some enduro strategy tips, which can be found here and here.

There are few places more equipped for this race than the recently repaved Nelson Ledges. It’s truly old school, with a pedigree to match. Constructed in 1958 on a rural potato farm, Nelson Ledges had no design plan, no million-dollar study, and didn’t involve contracts with architects, engineers, or planners. Two men – Marvin Drucker and John McGill – had a bulldozer and a goal to build a racetrack. And they did just that.

In the late 1970s, those involved with the track had the idea to hold an endurance race just for SCCA Showroom Stock vehicles. In 1980, the concept came to life with “The Longest Day of Nelson.” For the next 16 years, driving aces such as Hurley Haywood, John Heinricy, Andy Pilgrim, John and Jeff Andretti, Janet Guthrie, and Danny Sullivan turned laps in the dark at Nelson Ledges. The track has also been driven by celebrity racers including Tom Cruise, Steve McQueen, and Paul Newman.

And now, the next chapter is ready to begin. With 16 hours of racing (along with practice), and contingency programs from SCCA partners, the SCCA Enduro National Tour at Nelson Ledges presented by Summit Racing Equipment is about to get the green flag.

Is your team ready?