Back To The Future With Chip Herr 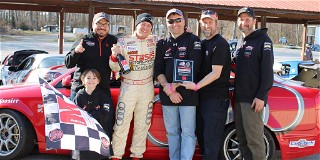 Ever wonder what happened to your old, favorite race car? If you wait long enough, it just might come back to you.

Chip Herr’s STaSIS Engineering Audi A4 won four races in 2006 and 2007 in SPEED World Challenge Touring Car in an era when the SCCA Pro Racing-sanctioned series was arguably the top Touring Car championship in the world. A race win in that period included wins over Peter Cunningham, Pierre Kleinubing, Brandon Davis and Eric Curran in Acuras, Bill Auberlen and Joey Hand in BMWs, Randy Pobst and Jeff Altenburg in Mazdas, just to name a few. One driver to a car, no pit stops, sprint races – it lived up to its “This is How Racing Should Be” tag line spoken in the late Tom Hnatiw’s booming voice in every way.

Now with 15 years gone by, Herr and that same Audi A4 are reunited with an eye on the Runoffs this year and beyond.

“The opportunity arose to get the Audi at the end of 2020,” Herr said. “It was a great opportunity to do something on my bucket list that I’ve never done, which is SCCA National racing. I’ve always been a fan. Why not go back in a car that I have so much history with.

And there is history there. There were several drivers in STaSIS machinery at that time, but it’s most recognizable with Herr’s name on it.

“It’s very personal to me,” he said. “I helped STaSIS develop it. It felt like home right away. I remember standing on the car at Mid-Ohio after my first World Challenge win and I think there are still dents on that roof.”

Though the car is the same, it’s also very different now in Its STU trim. It’s gone through two different owners, with the most recent – Matt Lang – restoring the outside to mint condition. When Herr was able to make the purchase, he called the people who know the car best – STaSIS Engineering – to work on the mechanical aspects.

It’s now a little heavier than it was in its glory days – then again, aren’t we all? – to fit SCCA rules, and as a car make and model that hasn’t been a big part of the class in recent years, may still be finding its balance.

But this bright red Audi helped Herr get his start, which he used as a springboard to more success – with Mazda in World Challenge, and then onto the Dominican Republic where he’s raced in a Touring Car championship off and on for 10 years. With a family now in tow and a business, Warwick Autopark, filling most of his free time, racing is all about fun these days.

“My goal is to win the Runoffs,” Herr said. “I like the idea that VIR is the next two years, and I love VIR. It’s not far from me. It’s a two or three year plan. And we’ve got some help. Roux Helmets are friends from the Dominican who came on board as soon as they heard I was doing this. MCS Shocks are at the top of their game and the best in the market, and Carbotech Brakes goes back to my Miata racing. Mike said ‘if this is your plan, I want to team up with you.’ I picked Hoosier and am dialing the car in on those tires.”

For this week, however, the focus is on the Hoosier Super Tour at Watkins Glen, where his STU class is in Group 7. Those of you at home can follow along with Herr, the Audi, and everyone else participating this weekend through live timing, radio and static videos on SCCA.com or the event page at SCCA.com/WGISuperTour.