SportsCar Feature: Going for It 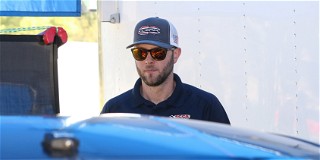 This article first appeared in the June, 2020 edition of SportsCar Magazine. Everyone can read the current and past editions of SportCar digitally here. To become an SCCA member and get SportsCar mailed to your home address monthly in addition to the digital editions, click here.

Have you dreamed of racing with the pros? Spec Miata racer Tyler Kicera plunged into Trans Am TA2, and the results are inspiring

In the adrenaline-soaked world of motorsports, what driver hasn’t wondered if they could cut it in the pro ranks? For 35-year-old Tyler Kicera, that was a creeping thought. Reality, however, was that he had a demanding day job, and he and his wife Stephanie had their first baby in 2018 – perhaps it was crazy for him to think about adding the complexities of campaigning in a professional racing series. Then again, Kicera had seen great success in SCCA Road Racing competing in the ultra-competitive Spec Miata class, and that experience could prove beneficial in a pro series. There was also the “what if” factor – he didn’t want to have lingering doubts about what might have been. So, he went for it.

In real life, Kicera is returning to the track for more TA2 action once the Trans Am series jumps back into action this year, and he’s hoping to expand his team’s participation further in 2021. So, with so much happening in his racing program, we took the opportunity to pose Kicera a few questions to truly understand his past, present, and what the future holds for Kicera Motorsports.

SportsCar: You have an unusual job, what might be the best way to describe it?

Tyler Kicera: My title is VP, Head of Creative at TAIT, a technology company that provides staging, robotics, high-performance rigging, and software for the live event industry including concert tours, theme parks, cruise ships, and architecture. We've built 18 of the top 20 highest grossing concert tours of all time, including the Rolling Stones, U2, Lady Gaga, and more. We've built equipment that has toured all seven continents [yes, including Antarctica], and even flown into outer space. My job is to provide creative direction for the company and work with our clients, artists, and other creative firms in the initial stages of project development.

SC: Switching gears, how did you first become interested in racing?

TK: My dad, Vic Kicera, was really competitive in everything from Spec Racer Fords to S2000s and stock cars. He got me behind the wheel before he ever did himself. But between my stints in racing, I was spending time at the track supporting him. It’s in my blood and part of who I am.

I raced quarter midgets from 6- to 12-years old and ran Allison Legacy cars for two years after that. I took a break from motorsports for a few years in high school, maybe to see if I really wanted it. At 21, I reconnected with racing and I ran two years of Spec Racer Ford in SCCA, and in 2012 jumped into a Spec Miata, which I’m still doing.

SC: What would you consider your top achievements in racing thus far?

TK: The biggest are probably the championships. In 2015 and 2016, I won the SCCA National Points Championship in Spec Miata and had to race head-to-head for those wins in the final race of both seasons. In 2016, I won a national championship [with another sanctioning body], which got me into the Mazda Motorsports Shootout.

From a single race perspective, after losing out in Mazda’s shootout in 2016, probably my Global MX-5 Cup debut at Watkins Glen, nearly winning in a side-by-side finish. Most recently, in 2019, finishing in fourth place in my TA2 debut at Watkins Glen, with the fastest race lap and running in the top three for most of the race.

SC: How did the Trans Am TA2 opportunity arise?

TK: Racing is a family endeavor, and we’re very competitive. After having success at the Club level in Spec Miata, we were looking for the next challenge. We explored different series from Global MX-5 Cup to open-wheel series, such as the SCCA Pro Racing F4 U.S. Championship. We evaluated each category: the schedule, the cost, the companion series, the level of competition, the vibe in the paddock, and how each series was run. For us, the clear winner was Trans Am. It's a name that has a lot of history, is recognizable internationally, and is an incredible value given the level of racecar you're driving. At Watkins Glen, we were two to three seconds a lap faster than an IMSA GS car for a lot less money. TA2 is a grownup version of Spec Miata, in my opinion. Then we came across a car for sale that was too good a deal to turn down.

SC: Stepping into TA2, what were your biggest concerns?

TK: Compared to the Spec Miata, the TA2 car has an almost infinite level of adjustability. As a small family team, we were afraid of getting in over our heads and being lost at the track. The great news is that Chas and Dick with Howe Racing are at each race to support teams running their chassis – we owe a lot of our success to them for helping to get our car dialed in throughout each race weekend. On a personal level, I had proven I could wheel a Spec Miata with the best, but this was a totally different beast and I wasn't sure how my driving style would translate.

SC: Did you find the increased horsepower and speeds overwhelming?

TK: I'll admit, I was a little intimidated at first. I knew the throttle would be more than an on-off switch as it is in the Miata, and I had never experienced that before. I did four or five laps in our first test session at Summit Point before pulling in to look over the car. That was all it took for the anxiety to turn into an ear-to-ear grin.

Top speeds are about 40 to 50mph more than the Spec Miata at most tracks, and lap times at a place like Watkins Glen are about 25 seconds faster. And, at VIR, we’re running flat through the Esses, hitting 150mph at the top of the hill – you are on a knife-edge.

SC: So, how much more complicated is a TA2 car than a Spec Miata?

TK: The car itself is very easy to work on as it is built on a tube chassis. Aside from the normal maintenance between races, you have to be diligent about going over the car after each session. Nutting, bolting, looking for leaks, and things like that. Speeds are so high and with the vibrations, you've got to stay on top of it or it only becomes a matter of time before you will have an issue.

SC: Compared with Spec Miata, how does the TA2 car race?

TK: We had the wrong transmission gearing in both Trans Am races in 2019, so it's hard to say the degree to which that contributed, but with the speed and horsepower, I found it very hard to pass. Aero comes into play, so you can be quicker and track someone down, but when you get close you lose air on the front splitter and the handling can totally change.

The dynamics of these longer races are much different than the sprint racing I'm used to – some people set their cars up for a short run and others go for a consistent race pace. I wouldn't say it's more difficult or less difficult, it's just a different sort of race experience.

SC: What difference most got your attention?

TK: On the Spec Miata we’re usually just making small setup changes between tracks. When it comes to the TA2 car, I was surprised at how much setup comes into play and how big the swings are. While I think the setup window to be competitive in a Spec Miata is fairly wide, the TA2 car is much less forgiving. It challenges you because some of the changes that improve the handling are counterintuitive to what I’ve learned over the years.

SC: Does the length of the race have a major impact on you as a driver?

TK: With the speed of the cars, the extra g-forces, and the heat in the cockpit, it’s a lot more demanding to endure the 100-mile race lengths than what I’m used to in Spec Miata.

I was surprised by how much patience can reward a driver in these races. There is usually some attrition, and even if someone drives away from you initially, the handling of everyone’s cars changes so much that the race can come back to you.

SC: How do race budgets compare between SM and TA2?

TK: Running costs for a TA2 race weekend including entry fee, two sets of tires, a set of pads and rotors, and fuel totals at about $6,000 – and that is before crash damage, transportation, hotels, etc.

A set of Pirelli tires for the TA2 car are only slightly more than a set of Hoosiers for the Miata, so that goes a long way to keeping costs down, but while things like brakes, shocks, exhaust, etc., are open for the class, the series does put cost controls on everything to keep spending in check. For someone who already has a rig and is mechanically savvy, it's a relatively small jump compared to some other pro series. That's precisely why we chose TA2.

SC: How complex is it to swap back and forth between SM and TA2?

TK: The TA2 car is much bigger, so you have to adapt your perception of where your corners actually are when switching back and forth. The TA2 car is a 4-speed dog box, so there is no need to use the clutch other than to get rolling, and it’s all left-foot braking. Believe it or not, going back to the Spec Miata after running the TA2 car a bunch took a few laps to shake the muscle memory of not using the clutch.

Going from the TA2 car to the SM definitely aids with precision, given how much slower the SM feels.

TK: I think everything in 2020 is up in the air at the moment, but I’m staying active on simulators with both Spec Miata and Trans Am racers. I had a great battle for the win with Cameron Lawrence in the first Pirelli Showdown virtual Trans Am race at Lime Rock Park in late March, ultimately finishing P2. In real life, we were planning to shake the rust off in the Miata before shifting focus to TA2.

SC: And, finally, what are your goals for the TA2 season?

TK: We had two incredibly strong TA2 weekends in 2019, running up front and in contention for podium finishes at both the Glen and VIR. Unfortunately, sometimes things happen that are out of your control. With some experience under our belt, I think we have a realistic shot of competing for wins – I’ll be disappointed if we don’t at least come away with a few podium finishes. Ultimately, I’m hoping to continue to build a name for myself in the series and find a way to expand my participation in 2021.