Another Round of Runoffs Ahead on CBS Sports Network 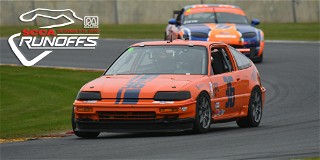 Got a case of the December Downers? Cure that with a heavy dosage of 2020 SCCA® National Championship Runoffs races airing Sunday, December 13 on CBS Sports Network. The day’s first therapeutic session will begin at 2 p.m. Eastern with Super Touring Light (STL), followed by a second dose administered at 3 p.m. Eastern containing vitamin B-Spec!

The STL championship race from Road America, which will have an encore presentation Sunday at 9 p.m. Eastern on CBS Sports Network, features a whole host of Mazdas, Hondas, Toyotas and Acuras similar to those spotted every day on streets. The big difference is these STL cars are a lot more colorful, make beautiful sounds, and are guided by some very skilled and competitive drivers.

The B-Spec battle, with its encore presentation taking place Sunday at 10 p.m. Eastern on CBS Sports Network, also involves vehicles seen regularly on roads. But these mighty race cars are driven with a bit more “gusto” than their road-going kin, resulting in a Runoffs race that was an undecided fight right to the last few corners.

A couple more select National Championship races will be broadcast later in December on CBS Sports Network. The broadcast exposure offers Sports Car Club of America® the chance to share its thrilling brand of championship road racing to millions while also showcasing accessibility to motorsports. Each separate race, captured by Apex Broadcast for the 12th year in-a-row, will be 60 minutes in length and include commentary from motorsports broadcasting icon Bob Varsha, as well as Runoffs stalwarts Ryan Myrehn, Tom O’Gorman and Larry MacLeod with Heyward Wagner again providing coverage from pit lane. All broadcast times are Eastern, and the schedule is subject to change. Check cable or satellite TV providers for local CBS Sports Network channels.

The SCCA National Championship Runoffs has evolved into what is now commonly agreed to be a pinnacle of American motorsports. Since 1964, SCCA has crowned Road Racing’s National Champions through the winner-take-all, single race Runoffs format featuring dozens of separate races over three days.