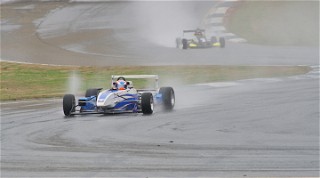 BRASELTON, Ga. (March 22, 2015) – A steady downpour throughout the day provided a mixed bag for Sunday’s SCCA Southeast Conference Majors Tour at Road Atlanta, Round Eight of 12 on the season.

A number of drivers saw their fortunes reversed, either positively or negatively, from Saturday’s action during Sunday’s 20-lap races.

Group 1: The soaked track gave the field an opportunity to catch up with Saturday’s leaders, and Austin Mack took full advantage of it in the No. 11 K-Hill Motorsports/H2 Companies Mygale/Ford.

Mack caught up to Saturday runner-up Scott Andrews’ No. 93 Exclusive Autosport Spectrum 014/Honda on lap seven, got in front on lap 11, then sailed away in the rain to take the win.

For the second straight day, Stevan Davis found himself in front for at least a portion of the final lap in Formula Vee, but was left holding just the silver medal. Pushing his No. 80 Hoosier/Butler Engines Racer’s Wedge/Volkswagen hard to catch back up to Mitchell Ferguson’s No. 52 Vorscha GB4, Davis moved to the front under braking in Turn 10.

Davis led through the left and right complex, but found a slick patch of pavement and turned partially sideways. Though he caught it and continued, it killed his momentum enough for Ferguson to sneak by with a fist pump at the finish line for the win.

Group 2: Jonathan Goring’s No. 18 Jonathan Goring Motorsports Mazda Miata nearly saw all the early work he’d put in erased with just a few minutes to go, when a car slid off the end of the backstraight and came to rest in the gravel trap. That brought out a full course caution with the 40-minute time window winding down, and erased a five second lead for Goring.

With a host of rivals in his mirrors, Goring again got away on the one lap dash to the end. At the checkered flag, Goring was 1.109-second ahead of Danny Steyn’s No. 39 ADEPT Studios/Rossini/OPM/Traqmate Miata, and almost two seconds ahead of Saturday winner Dillon Machavern’s No. 24 Heritage Mazda Miata.

Group 3: Alex Mayer held off not one, but two restarts in the rain to keep his No. 77 JDR Racecars/Hoosier Tire JDR in front, cruising to a 4.672-second win in the rain.

The weather had cars spinning in all directions and into the gravel to bring out the full course cautions, but Mayer proved the class of the field on Sunday. Jason Bell’s No. 2 Gridsport Citation FB got in front of Mayer on the lap 14 restart, but Mayer was back in front by the completion of the circuit and stayed in front to the finish.

Group 4: The rain spaced out the production car group through lap times and some spins, leaving Tyler Kicera to run to the Touring 3 win in the No. 141 Kicera Motorsport Mazda MX-5. Eric Powell’s E Production No. 47 CCP Fabrication Porsche 924 ran second overall.

Four drivers doubled up with weekend sweeps, winning in both the dry on Saturday and the wet on Sunday. Ken Kannard (No. 39 Northwest Cable Mazda Miata) in F Production, Will Perry (No. 36 Rivergate Honda CRX) in H Production, Michael Scornavacchi (No. 22 BFGoodrich Tires Ford Mustang) in Touring 4, and Micahel Kamalian (No. 99 RevolutionSpeed.com Mazda Miata) in GT-Lite.

Group 5: Not even a big spin on lap eight could keep Tray Ayres from repeating in Gen 3 Spec Racer Ford, as the No. 7 Ayres Racing SRF ran flag to flag for the win. By the time Ayres had his incident, he was far enough in front of the field that he was still leading by five seconds when he rejoined the race. Ayres finished with a 7.705-second win.

Denny Stripling snuck his No. 41 Spec Racer Ford away from the rest of the SRF-class field, climbing up to eighth overall in the race despite a split start and the power and handling advantage of the newer cars.

Group 6: The rain caught out the big bore group on the opening lap, where Jorge Nazario’s GT-2 No. 165 Brava Lubricants Chevrolet Corvette got sideways in the rain and went hard into the wall. While Nazario quickly exited the car to assess damage, it brought out a black flag for clean-up.

Back underway, the closest battle was for the overall lead, but in different classes. Doug Peterson’s GT-1 No. 87 3Dimensional.com Chevrolet Corvette was chased by Tony Ave’s GT-2 Lamers Motor Racing Ford Mustang for the distance, with Peterson taking the checkers less than a second before Ave.

Dainton Brooks repeated in American Sedan in the No. 31 Georgia Controls Ford Mustang, skating around the very slippery track. William Wilson was credited with the GT-3 win in the No. 147 Pink Mazda RX-7, as was Ted Height in Touring 1 in the No. 27 Bank of North Georgia Ford Mustang.

Group 7: With heavy rains falling again, Nick Leverone piloted his No. 31 Flatout Motorsports Mazda Miata to the front of a field that traditionally features quicker and more powerful cars to take the Super Touring Lite win.

Tim Kezman’s No. 144 Calypso Lemonade Porsche 911 GT3 got away from his class competition to take the Touring 2 class, while Thomas Lyttle held on in Super Touring Under in the No. 43 Cedar Creek Wombat Rescue Mazda RX-7.

Darren Seltzer stretched out late to sweep B-Spec in the No. 64 BFGoodrich Tires Honda Fit, shaking free of a side by side battle early with Brian Kelm’s No. 12 Ford Fiesta.

Group 8: Conner Kearby (No. 56 K-Hill Motorsports Swift 016/Mazda) repeated in Formula Atlantic after spending the early part of the race chasing his father, Gaston Kearby (No. 69 K-Hill Motorsports Swift 016/Mazda). The elder Kearby was still in front on lap 13 when suddenly his machine failed to accelerate out of a corner, done for the day. From there, Conner was alone on the lead to the finish line.

Joseph Harris’ No. 132 Formula Mazda finished an impressive second overall, the only other car on Kearby’s lead lap. The win capped a sweep of the weekend in class for Harris.

Spencer Brockman and Jacek Mucha both snagged top five overall finishes, Brockman in the No. 77 K-Hill Motorsports Van Diemen to win Formula Continental, and Mucha in the NO. 7 Phoenix/Innotech JM016CP/Mazda to win Prototype 1.

The Southeast Conference returns to action April 17-19 at VIRginia International Raceway for rounds nine and 10 on the season.

More information on the event can be found at SCCA.com/AtlantaMajors.