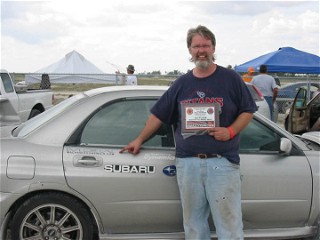 HOMESTEAD, Fla. (March 3, 2008)  A snow Rally was definitely not in the cards at the most recent SCCA RallyCross National Challenge. The second stop on the 2008 calendar took place at Homestead Miami Speedway in sunny southern Florida.RallyCrossers were greeted by unseasonably hot conditions at Homestead with temperatures in the high 80s. Thankfully the courses held up well throughout the weekend, allowing each day to run smoothly. The same could not be said for the tires in use, which reportedly took a beating from the pack coral surfaceStock Front-Wheel Drive belonged hands-down to Duncker Felix. His Honda Civic beat out Courtney Squires Nissan Sentra by more than two minutes. Stock Rear-Wheel Drive went to the Porsche 944 of Tim Mincey and Carlos Filipes Subaru Impreza was the Stock All-Wheel Drive winner.Randy Lees Subaru Impreza STi topped three WRXs in the Modified Four-Wheel Drive class despite arriving late and battling an oil leak on day one. After making repairs all night Saturday and into Sunday morning, Lee resumed his battle with Winston Crosbie II and came out on top by 13.8 seconds. Tim Mincey Jr. took home Modified Two-Wheel Drive honors in a Honda del Sol.The largest field of the event, Prepared Front-Wheel drive was won by Nick Martinez in a Mitsubishi Mirage. A slim 22.2 seconds separated Martinez from the Volkswagen Golf GL of Jorge Valdivieso, who ended day one in third behind Martinezs teammate Brian Lepak, but made up enough time on day two to finish 16 seconds ahead of Lepak.In Performance Rear-Wheel Drive, Derick Sautars Ford Mustang beat out Martin Culpeppers Mazda MX-5 for the win. Charles Theocles Audi Quattro was the Prepared All-Wheel Drive winner.The next RallyCross National Challenge event will be held May 4 at Mid-American Motorplex in Omaha, Neb. Full results from Homestead and a 2008 RallyCross National Challenge click the Rally tab at the top of the page.